Our reason for posting Juan Pablo’s journey has been to allow friends and family to remain updated with his progress and to share specific prayer needs.  Emily and I desire to be as transparent as possible while allowing the story of God’s love in his life to be told understanding that his consent has been given for the content shared herein.

Just 3 months ago, Juan Pablo underwent surgery to insert skin expanders below his jaw line on each side of his face.  We remember how brave and confident he was just before anesthesia.   We, of course, were a little scared, but trusted God would deliver him through the surgery.  The time between the updates received from the OR nurse as to the progress of the surgery is still fresh in our minds.  The Lord, who was near to JP at his infant accident in Guatemala, had also been faithful to inspire this procedure and deliver him through it.  After being in the recovery room for a couple of hours, he was transferred to a private room in the burn unit.  While there, he met a couple other children who had been burned and saw the equipment used to treat patients with burns.  I believe he connected the devices and mechanisms to the need of severely burned skin just like his.  God had connected us to Riley Children’s Hospital to learn of this new procedure and surround us with experienced and friendly medical staff.  JP was comforted alongside by his Mama and Papa, grandparents, and of course brother Sam, who is seen below about to bite into his brother’s IV tube. 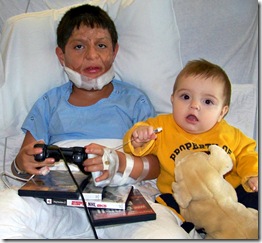 We knew Juan Pablo was progressing along when he was able to keep down food and prop up his hands to play video games provided by the burn unit.  Just like being at home!

Before being discharged, he wanted to take a picture of himself without the bandages to see his stitches..

Upon arriving home, he rested by the company of his best friend Mala…

Due to the delicacy of the expanders, Juan Pablo has been restricted to only light activity.  We agreed that it would be difficult to harness his 8 year old energy level, but thought that having the surgery during the winter season  would be the safest.  Each week, a visit with the plastic surgeon would be necessary to fill the expanders.  Since the initial surgery, we’ve gone to Riley about 12 times to have JP’s expanders filled a little each time.  He has done so well during each of the appointments, which consist of medical staff evaluating the expanders, then inserting a small needle through an internal port of each expander.  A syringe of saline is given in various amounts up to the point that Juan Pablo is in pain.  A helpful tool that has been used during the expansion visits is an iPad loaded with tons of games.  As JP receives the injections, a Child Life Specialist sits with him and the tablet to shift the focus of the pain through the distraction of a game.  Everyone was surprised how quickly he was cruising up the levels of the games he played.  No shocker to us, but I have a feeling he’ll be asking for one of those for his next birthday.

We’ve had a couple scary moments just weeks after the initial surgery.  Juan Pablo’s neck began to swell.  The first time this happened, we took him to Riley’s ER when an on call surgeon drained the excess fluid from his neck and tested it to find that it was not infected, but only that his body was probably just responding to the new foreign objects present.  Outside of this, JP hasn’t had any trouble except for some pain after receiving the injections.  We’ve trusted the Lord’s presence with our boy through one of the biggest moments of his life.  Our prayer has been consistent in that God’s best for JP would be done, he would continue to have a compassionate heart, and the testimony of what Jesus Christ has done in his life would speak of His goodness and love more than ever before.

With Juan Pablo’s consent, here are some pictures of him from the past months since his surgery, which shows his progress:

So, now we are ready for surgery, which is scheduled for Tuesday, March 22nd at 11:30 AM.  During this surgery, the new skin that has been expanded over the past several months will be stretched up and set in place of the scarred skin located just below his eye line, around his face, and down to the chin.  We are all excited about this change for Juan Pablo.  He is especially ready to get the expanders out and comments often that he is excited for his new skin.  God led us to JP because of his burns and we will miss that about him.   Our response has always been that we love him and see beauty just as Jesus sees him.  Though the outward appearance will change, his heart and identify as a special child of God will remain.

Here are some specific ways you can be praying:

This site uses Akismet to reduce spam. Learn how your comment data is processed.